I remember the Crest Hotel way back in the 70’s. In fact it was from this hotel that I gathered my first impressions of our newly adopted land, South Africa.
Emigrating here with my parents from England in January 1975, I was 12 years old when we arrived at the door of the Crest after a short cab ride from the austere Jan Smuts airport.

Upon arrival at this comfortable 3 star hotel, a stone’s throw from the bustling boulevards of Hillbrow, I was awestruck by the views from our 12th floor window. Glittering skyscrapers and a zillion apartments surrounded us on all sides; our hotel it seemed was at the epicenter of all this glitz, with its lively terrace and sparkling pool. For the two weeks that we lived in Hillbrow at the Crest while my father sought rented accommodation in the leafier northern suburbs, I gathered impressions of this ‘Americanized’ metropolis, admiring its scale & lofty buildings, sensing its economic presence and buzz, all the while searching out the exotica of black faces to remind myself that I was in Africa after all.

Certainly during those first few weeks while strolling past the café & bakeries and soda pop joints of Pretoria & Kotze streets on balmy summer evenings, I could see clearly that this was the abode and playground for a predominantly white cast. I saw lots of happy white faces! An illusion of blissful living. An illusion of harmony and human equality. Yes this was a place of happy shiny white people, and I, the little white kid who’d just stepped off a plane in Africa from England, was entranced.

32 years later, I return to the Crest. Still entranced but for different reasons. The place has changed, the city has changed, and the country has changed. I’ve changed.
The Crest hotel therefore is my personal attempt to join dots, and answer pertinent questions to my own sense of failed idealism and dislocation. Projected through the presence of others, the Crest after all is where my journey to South Africa began. For many presented here today though, this is where their journey will end, or has ended already. It’s where their relationship with South Africa is coming to an end too, but certainly did not begin.
As an artist/photographer I intend to explore further themes or locations that I hope will allow me to investigate my relationship with this country and my country of birth, England. And how the two sit incongruously side by side within my own psyche. The Crest is where I chose to begin this investigation.
The Crest Hotel 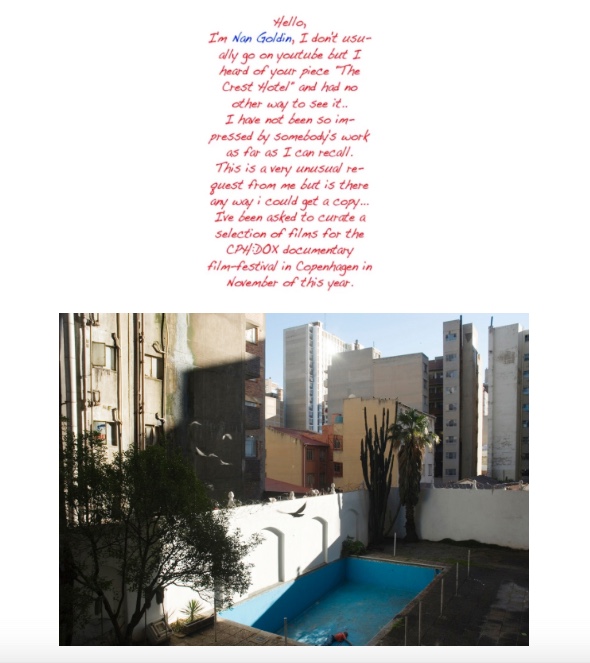 Hello I'm Nan Goldin, I don't usually go on Youtube but I heard about your peice, The Crest Hotel, and had no other way to see it.

I have not been so impressed by somebody's work as far as I can recall. This is a very unusual request, form me, but is there any way I could get a copy....?

I've been asked to curate a selection of films for the CPH:DOX documentary film festival in Copehagen this year.
Loading...